Celebrating 25 years of Big Nate! Creator Lincoln Peirce shares his long journey with our favorite sixth-grade Renaissance Man, along with his favorite 25 Big Nate comics from the past 25 years.

Back when I started Big Nate, I remember reading that most comic strips lasted only two or three years.  And early on, it looked like Big Nate was going to be one of those that didn’t make it.  I’m grateful it stuck around — not only because I can’t think of another way I’d rather make a living, but because two or three years just isn’t enough time for a strip to hit its stride.  Big Nate first appeared in 1991, and when I look at the strips I did in the early and mid-nineties, I can see that I was learning on the job.  I was figuring out how to write good gags, how to draw consistently, and how to construct interesting storylines day after day.  Berke Breathed of Bloom County once said that comic strips have a shelf life of about ten years before they start declining, but I respectfully disagree:  after doing Big Nate for ten years, I felt like I was just scratching the surface.  I believed that my best days were ahead of me.  I still feel that way.

Looking back on a quarter century’s worth of Big Nate is a reminder that events often unfold in ways you might not have predicted.  I started the strip thinking I’d focus on Nate’s family and home life; instead, the strip is largely concerned with Nate’s school adventures.  I used to feature Nate’s own comics — simple cartoon drawings on lined notebook paper — several times per month; now I don’t feature them at all.  Once-prominent  characters like Ellen and Jenny have faded into the background, making room for the likes of Gina, Chad, School Picture Guy, and a host of others.  But the more things change, the more they remain the same:  Nate is still an energetic and exasperating sixth grade boy, just as he was in 1991.  And even though I’m now in my early 50’s, I still feel closely connected to the experiences of middle school.  Once, while giving a talk at a local library, I was asked, “How do you stay inside the mind of an 11 year-old boy?”  And my answer was:  “I never left.”

When my friends at GoComics asked me to pick my Top 25 Big Nate strips, I decided to select one from each year.  In this election season, making sure that every year from 1991 to 2015 was represented seemed like the democratic thing to do.  This isn’t meant to be a list of the “best” 25 strips I’ve ever done.  Some strips are here because they’re personal favorites, others because they mark some sort of milestone.  Some are included simply because they crack me up.  That’s a comic strip’s ultimate bottom line, after all:  it’s got to be funny.  So here they are, from 25 all the way to number 1, with comments included for the Top Ten:

Chad has become one of my favorite characters in recent years.  He’s got this endearingly sunny disposition, and he’s totally guileless — a complete innocent.  Contrast that with Coach John’s psycho drill sergeant persona, and this is the result. This strip is a favorite for several reasons.  First, you’ve got the good-natured teasing that is so frequent among middle school boys.  Second, you have the gag in the third panel.  And finally, there's the vision of Nate and Francis laughing uproariously in panel #4.  Laughter is contagious.

This sounds obvious, but a really important part of cartooning is drawing funny pictures.  My drawing skills are average at best, so when I make a drawing I’m 100% happy with, that’s news.  I love the expression on Nate’s face in panel #4.  I don’ think I can draw him any funnier than that.

Doctor Cesspool isn’t just a character in Nate’s notebook; he’s a character I invented when I was in sixth grade, and he was a big part of Big Nate during the first few years.  Featuring Nate’s comics as part of the strip allowed me to write different kinds of gags.  It was like doing two strips instead of one.

Charles Schulz, the creator of Peanuts and my boyhood hero, died in February of 2000.  Later that spring, the National Cartoonists Society invited its members to include a tribute to Peanuts in our own strips.  This was my effort.  Charlie Brown is probably the most iconic character in the history of comic strips, so drawing him in Big Nate was a thrill and an honor.

One of the longest storylines I ever did involved Nate and his P.S. 38 classmates being temporarily relocated to Jefferson — their rival school.  The climax is an epic soccer match in which Nate, the goalkeeper, makes a great save to win the game.  Big Nate is a strip that relies heavily on dialogue, and having the chance to do a wordless strip was a real treat.  And this storyline generated a lot of reaction from readers, who were happy to see Nate be the hero. I'm very fond of slapstick humor and the types of pratfalls that might be possible in real life but are highly unlikely to actually occur.  You could try to describe a gag like this in words; you could try to film it using actors or even animate it.  But there are certain gags that just seem to work best in the comic strip format.

I think this strip succeeds because it takes something we’re all familiar with — the way teachers use emojis to rate academic performance — and then doubles down by including an image that’s one of the most memorable emojis in the history of art.  Even if readers have never seen Edvard Munch’s painting The Scream, they understand the gag.

There’s nothing especially significant about this strip, but it's one of my favorite gags ever, and I think it really sums up Big Nate.  Nate receives some information; he processes that information differently than anyone else would; he expresses his feelings in a way that is uniquely his own; and he gets in trouble as a result.  That’s pretty much what the strip is all about.

When I was twelve years old, I bought a 25th anniversary treasury of my favorite comic strip called Peanuts Jubilee.  I read it over and over, astonished by the fact that Charles Schulz had been creating strips about Charlie Brown & friends for so long.  But now that I’ve logged the same amount of time with my own comic strip, I realize that 25 years isn’t very long at all.  It’s gone by in the blink of an eye.  And I’ve decided that there’s nothing particularly noteworthy about sitting at my drawing table and producing a comic strip each day.  It’s my job, and it’s also what I love to do.  The amazing part is that there are so many people out there who apparently care about Big Nate almost as much as I do.  Thank you, Big Nate readers!  Your devotion to the strip is what has enabled me to continue writing and drawing it for as long as I have, and it’s been my pleasure.  Time will tell if I have another quarter century in me, but I look forward to keeping you entertained for many years to come. 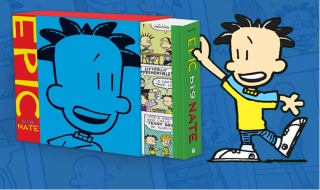 PREORDER EPIC BIG NATE - Hundreds of cartoons, selected by Peirce and presented with his witty and informative commentary, trace the evolution of the Big Nate comic strip and its colorful cast of characters. Also included is an exclusive Q&A featuring Peirce and Diary of a Wimpy Kid author Jeff Kinney, detailing the friendship and mutual admiration that contributed to each cartoonist’s success.