A Conversation with Lincoln Peirce: Celebrating 30 Years of “Big Nate”

This month marks the 30th anniversary of the debut of Big Nate, the daily syndicated comic strip by Lincoln Peirce that follows around the “exasperatingly lovable and obnoxious” Nate Wright, along with his friends, family, arch-enemies, girlfriends, and teachers. (Some, who shall remain nameless, could land in multiple categories, of course.)

Launched on January 7, 1991, the Big Nate universe has since expanded into a series of eight illustrated novels, a musical, and now a 26-episode animated TV show on Nickelodeon. But Nate hasn’t aged a day, still an 11-year-old precocious sixth grader who's constantly riddled with detentions, attempts many sporting feats, and develops seemingly interminable—though unrequited—crushes.

We caught up with Peirce who explains why he thinks middle school is a comic-strip sweet spot, reveals some secrets about Nate, and reflects on his own feat: writing and illustrating a daily comic for three decades. 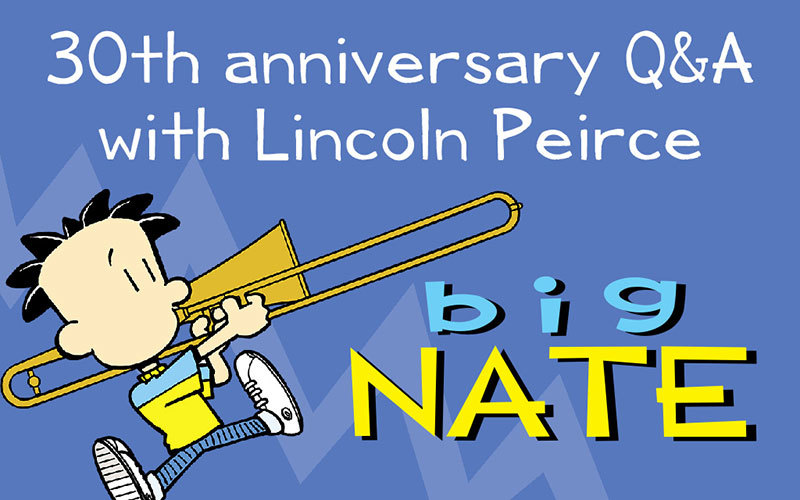 Not so snowy! But I'm sure we’ll get more than our share before winter is over. Otherwise, things here are much as I imagine they are everywhere in the country, thanks to the COVID emergency: isolated, somewhat monotonous, and a little surreal. I'm fortunate that I was already accustomed to working alone at home—that’s made adjusting to the pandemic somewhat easier.

What are you excited about right now?

I’m pleased to have recently passed the “30 years of Big Nate” milestone. Way back when I got started, I remember reading that most syndicated comic strips don't last more than two or three years. I’m grateful to have beaten the odds!

I’m not sure—probably some harebrained scheme. He’s a creative thinker with a can-do attitude, so it doesn’t take much to fire him up. But as the past thirty years have shown, just because Nate is excited about something doesn’t make it a good idea. In fact, it’s usually pretty much the opposite of a good idea.

What’s one thing people don’t know about Nate? About you?

Readers don’t know why Nate doesn’t have a mom. The much-too-long answer is that back when I started the strip, I mentioned on a couple of occasions that Nate’s parents were divorced. I thought a single-parent family would set Big Nate apart from other strips. I planned to introduce Nate’s mom as an occasional character, but I soon realized that Nate’s school life was taking over the strip and his domestic life was fading into the background. At a certain point, I decided it wouldn’t make sense to bring Mom into the cast—and so I just sort of pretended the whole thing never happened!

As for unknown facts about me, here are three: I enjoy making pies, I do not hear particularly well out of my right ear, and I once had lunch with “Wheel of Fortune” host Pat Sajak.

What’s been your favorite story arc or gag in 30 years?

Hmm. I don't think I can pick a single gag, but there’s a story arc I've always liked, from back in 2008. Toxic mold is found in Nate’s school and as a result, he and his classmates must attend classes at Jefferson Middle School, their archrival. The story lasted for at least three months, and it was fun to write gags about the culture clash between the two groups. One of the high points of the arc was a soccer match in which the P.S. 38 Bobcats, thanks to some heroics from Nate, managed to upset the seemingly unbeatable Jefferson Cavaliers. I enjoy giving Nate his occasional moments of triumph. Losing is funnier than winning, as Charles Schulz famously said, but that doesn’t mean your characters have to lose every single time.

My superpower is my uncanny ability to remember 1970s Top 40 song lyrics, which doesn't come in handy all that frequently. Nate’s superpower is his unshakeable self-confidence. Kids sometimes ask if I based Nate on myself, and the answer is no—he’s the sort of kid I would have liked to be, but wasn’t. He has so much moxie and his life is way more eventful than mine ever was. That’s because he never loses faith in himself. It can make him a little obnoxious at times, but ultimately I think his self-confidence serves him well.

Best advice you would give yourself 30 years ago when you started the daily strip?

If I could, I’d convince myself to take more time to improve my skills before launching the strip. When I look at Big Nate strips from the early 1990s, I'm not very happy with them. I couldn’t draw all that well or with much consistency, and I don’t think those strips from the first few years look very good. My advice would be: take a year, and do nothing but practice your craft. But back then, I would never have followed that advice. I was trying to reach my childhood dream of creating a nationally syndicated comic strip, and I was in a big hurry.

Other than cartooning, what profession would you like to try?

Oh, that’s easy. I love music and have always admired people who have mastered an instrument. I think it would be wonderful to be a musician.

What profession would you never want to try?

When I started writing Big Nate chapter books back in 2010, my editor gave the manuscript of my first draft to the children of some of her friends and colleagues, in the hopes that the kids would provide us with some blurb-length reviews we could use. An 8-year-old named Liam wrote something on a yellow Post-It note, which I still have on my bulletin board. It says: “Big Nate is going to blow your pants off.”

When I submitted the strip that would eventually become Big Nate, my first editor thought that the ensemble cast was too big. She suggested that I pick one character to build the strip around. I chose a character named Nate, who in my early submissions was sort of mild-mannered. I gave him a much bigger personality and tweaked his appearance a number of times. That was really helpful feedback.

What’s one thing Charles Schulz said to you that you’ll never forget?

He invited me to come out to California and play hockey with him. He had his own ice arena, and he was a Minnesota boy who loved to skate. I also play hockey, and we sometimes spoke about it when we talked on the phone. And one day, he said, “You should come out to visit, and we could play some hockey together.” The problem was, I was only a couple years into my career at that point and was barely managing to make a living. I didn’t have two nickels to rub together, let alone the money to fly from Maine to California, and my wife was expecting our first child. So I didn’t go. It’s one of my real regrets. But I’ll never forget that he asked me to come.

The middle school experience has changed a lot in three decades, obviously. But what’s stayed constant?

The thing that will never change about middle school is the way that it coincides so perfectly with the shift from childhood to adolescence. Elementary school is like a safe little bubble, and high school is like the wild, wild west—but middle school is the transition between the two. It’s where you go from having one teacher to several different teachers. You go from having a cubbyhole in your classroom to a locker in the hallway. Suddenly there are events to contend with that weren't part of elementary school, like intramural sports and school dances. It’s a seismic change. Here in the Northeast, middle school includes grades six, seven, and eight. Most kids are about 11 when they start and 14 when they finish. Those tween and early teen years can be pretty tumultuous. I remember sixth grade as being the most eventful year of my life. That’s why, when I started the comic strip, I chose to make Nate a sixth grader.

How do you know when a joke works?

It works when I think it's funny. I realize that’s probably a “Captain Obvious” answer, but if I write something that cracks me up in the privacy of my office, I feel reasonably confident that a decent number of other people will find it funny, too. The difficult part isn’t separating the good gags from the bad ones; it’s separating the good gags from the mediocre ones.

In 30 years of Big Nate, what makes you most proud?

I’m proud that Big Nate has been embraced by so many kids in recent years. It wasn’t all that long ago that people didn't consider comics to be legitimate reading material for children. But that’s changed now, and reading comics is often a way that “reluctant readers” become interested in books during elementary school. To play even a small part in encouraging kids to read is really rewarding.

Keep up with Nate and his pals on GoComics here!