Cheers to 25 Years of "The Duplex"

This month, we’re celebrating a quarter-century of The Duplex, the syndicated strip by brothers Glenn and Gary McCoy that features Eno and Fang—a perpetual dim-witted bachelor and his lovable canine sidekick—and their long-suffering neighbors, Gina and Mitzi.

The Duplex’s journey began with Glenn in 1996. “It sprouted from a scribbled character in one of my sketchbooks,” he says. “I drew this big-nosed guy, with glasses, a weird curl on his head and a smart-alecky smirk, and I instantly felt like I knew everything about him.” Twenty-five years later, the strip is still drawn by Glenn and the gags pinch-hit by Gary. We caught up with Glenn to reflect on the journey of this strip, and the dynamics between this awesome foursome. 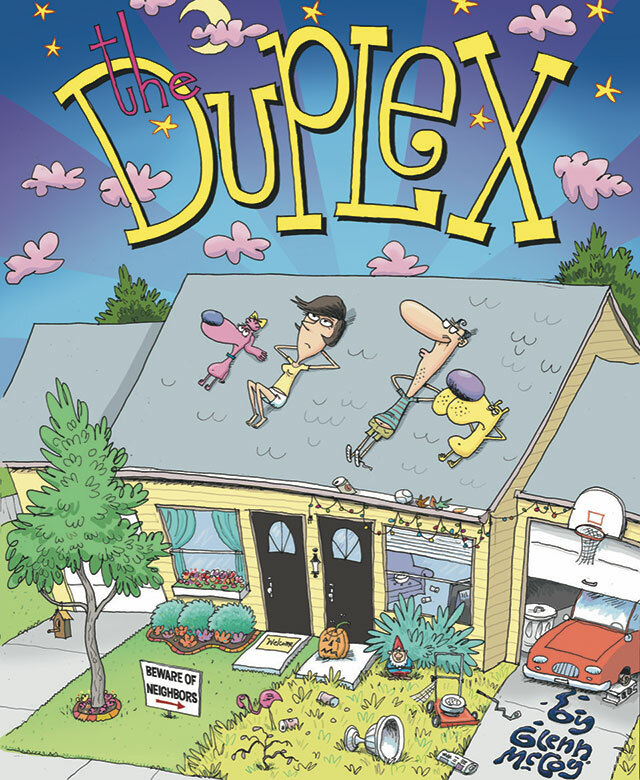 Let’s start with the characters. How did you create Eno, Fang, Gina, and Mitzi?

[Eno] was a 90-pound weakling with an oversized ego and no self-awareness. I enjoy characters like Barney Fife, Charlie Brown, and Michael Scott (from The Office) because although they are deeply flawed you still root for them. That’s how I saw Eno. Now that I had found a funny character, the challenge became putting him in a suitable environment where he could do the most damage. I thought it would be funny if he lived close to a smart girl, which would play against Eno’s dumb, chauvinistic nature. That’s when I brought Gina into the strip.

In the earliest version, Eno and Gina both had human roommates and dogs, but I decided I could streamline things by ditching the extra humans and making the dogs talk. That’s how Fang and Mitzi joined the cast. Having them live in a duplex seemed like the best way to put them at odds.

We don’t see Gina and Mitzi as much lately. Why’s that?

Originally, my intention was to have half of the strips revolve around Eno and Fang and the rest around Gina and Mitzi. It was going to be a “when worlds collide” idea focusing on the differences between the sexes. However, as things progressed, I realized that I wasn’t biologically or intellectually qualified to speak for the female population. When I wrote gags, they tended to be sarcastic and deprecating, which fit Eno and Fang’s personalities more than Gina and Mitzi’s. Eno is just a better pitch man for my dumb brand of humor. Therefore, the premise shifted to being more of a “buddy” strip, exploring the relationship between Eno’s lazy ineptitude versus Fang’s childlike naivete. Gina and Mitzi still make appearances but they’re now more like guest stars.

Let’s talk about Eno and Fang’s relationship. How would you describe it?

I’ve always been amused by how we relate to our pets on different levels. Some days my dog is my best friend, intelligent and empathetic, while other times he’s rolling in garbage or barfing in a shoe. I thought it would be fun to embrace this dichotomy and have Fang talk and drink beer with Eno, but then also have him do dog things like chase squirrels and dig holes in the yard—while rationalizing his dumb behavior in a very human way. Eno, of course, tries to exert his dominance over Fang but doesn’t have the intellect to back it up. Fang puts up with all of Eno’s shortcomings because that’s what dogs do, unconditionally.

These guys have been dating, baseball’ing, hanging out, watching TV, living the bachelor life for 25 years now. What’s one thing we don’t know about them?

Hmmm … let’s see. Eno’s full name is Eno L. Camino. He’s named after my great uncle Eno. Fang’s name was based on how he originally had a big fang hanging out of his mouth. The tooth eventually disappeared, although I can’t remember how or why.

Is Fang a good wingman, or does he cramp Eno’s game?

Eno has no game. In the bars, Fang always attracts the girls with his cute puppy face and sweet innocent nature. However, when Eno takes over the conversation the girl typically excuses herself to the bathroom and crawls out a window.

When did Gary start writing for the strip?

A couple years back my work for movie studios got pretty intense. I was so busy that it seemed like I might have to take a hiatus or, even worse, retire the strip. My brother Gary is a funny, award-winning cartoonist who I’ve been working with on our panel The Flying McCoys for years. I would never have thought of using a gag writer for The Duplex in the past, but Gary and I are incredibly close and we share the exact weird sense of humor. Reaching out to him for help just made sense. He’s done such a terrific job that I get to enjoy the strip on a whole new level: as a reader. I still draw the strip, but I now enjoy the surprise of reading Gary’s hilarious gags.

What happened in your family growing up that produced two cartoonists/humorists?

We’re the product of two very funny parents. My dad Gerald and mom Dorothy raised us on a truck driver’s salary in a cramped house with four hell-raising sons. The wisecracks and insults came fast and furious in our house, and you had to learn to keep up. Gary and I were also weaned on Peanuts paperbacks, which further honed our humor. I have vivid memories of the two of us lying on the cold basement floor on hot summer days reading Snoopy books. Our comedy is rooted in those ragged old paperbacks. After reading and rereading them, we eventually began to analyze the structure of the strips: how Schulz would use a third panel with no action to time the punchline in the fourth panel, things like that. We had four local newspapers in our area, so we would pore over reems of comic pages every day. We appreciated the art and writing on a different level than our schoolmates. I even started drawing my own daily comic strips while pretending to be a syndicated cartoonist. I drew constantly though my childhood and was the cartoonist for my grade school, high school, and college papers. Luckily, I knew at a very young age what I wanted to do with my life.

How long does a typical strip take for you to create?

When people ask me how long it takes me to draw a strip I usually reply, “about twenty-five years.” Each cartoon is the cumulative product of years of honing my drawing and writing skills, and comes from a lot of hard work and discipline. The hardest part about what I do is coming up with the gag. This is a process that can take a few minutes or all day. My drawing style is intended to look casual and spontaneous, but I will often redraw the same strip four or five times because it doesn’t have the right loose feel I’m striving for.

Walk us through the process.

I usually begin each day sketching over breakfast at a coffee shop. During this time, I simply have fun scribbling sketches and free-associating words, thoughts, and images. This probably looks like “goofing off” to the untrained eye, but it’s at this stage in the process when the best ideas begin to appear. I bounce thoughts off my wife to see if they’re funny, stupid, or both. (I’m aiming for the perfect balance between the two.) Once I’ve settled on my idea, the drawing seems to go by quickly because it’s at this stage that I have the most fun. I pencil out the strip in a very rough form because I like to surprise myself in the inking phase, making last-minute decisions and adding small details and visual jokes. I typically use the cheapest materials like typing paper and Sharpies. Once the cartoon is inked, I scan it into the computer and add color in Photoshop.

What’s the best compliment you’ve received about The Duplex?

My hero Charles Schulz once told me that I “draw funny.” I had dinner with him and told him how much his work had impacted my life and how he inspired me to be a cartoonist. I gave him one of my Duplex books as a gift. Years later, after he had passed away, I visited his studio, which has been left exactly as it was when he worked there, like a time capsule. I was pleased to see my book on his shelf. I still think of that occasionally when I need inspiration.

Be sure to follow The Duplex on GoComics where it’s updated daily.