On May 6, 2017, editorial cartoonist Clay Jones began a journey he wasn’t aware he was starting. He posted his day’s cartoon on GoComics like usual, and then the next day posted another, followed by another, and another—until he looked up five years later and realized he hadn’t missed a single day.

While many creators in the syndicated cartooning world update their comics every day, political satirists’ work is dictated by the news cycle. Most cherry-pick an issue and post a couple times a week at most. For Jones, though—who’s been writing, drawing, and taking jabs at politicians since 1990—he’s found the past five years particularly fruitful. So when the pickings were that good, he couldn’t help but just keep going. We chatted with Jones about how he’s kept up this half-a-decade streak, and his plans to carry it on.

Five years! No days missed! Is that correct?

It’s true. When I asked GoComics to confirm it, I wasn’t entirely sure how long of a streak we had.

It was not. In fact, I went back and counted, and I think if I hadn’t missed one day in 2016, this would be a six-year streak.

On May 6, 2017, I’m sure I was just thinking of that day’s cartoon and probably had more thoughts about lunch than a cartoon streak. I was a year into it when I realized I had a little streak going. That may have been the start of being semi-serious about it.

I must give Donald Trump some credit for this because he was giving us too much material to work with. It was hard to take days off. I often had trouble finishing a cartoon before the next scandal exploded.

How many times did you post prior to then? (Any similar streaks since you started cartooning in 1990?)

I was like all the normal political cartoonists, the guys who have actual lives outside of cartooning, and it was about five days a week with vacations, layoffs, sick days, get-hit-by-a-car days, and firings here and there. I worked for the Honolulu Star-Bulletin in 1997-98 where I had to draw two cartoons a day, six days a week (one for the editorial page and one on a local issue for the front page). When I interviewed at The Free Lance-Star in 1998, the publisher was skeptical I could draw five cartoons each week.

What’s your working style; do you have a few “evergreen” posts in the bank in case you’re creatively blocked?

Not really as “evergreen” topics bore me, and I believe one of the worst things a cartoonist can do is be boring. There is a “maybe” folder of cartoons.

I have a file for ideas and concepts, most of which rot away. Then there’s the maybe folder of rough sketches. … I’m usually bored of the cartoon in the “maybe” folder by the time I return to it. Most cartoons you see from me were written and drawn the day of or the day before.

I don’t have a choice in being creatively blocked. I don’t have time for it. That doesn’t mean there aren’t difficult days when the ideas are taking their sweet time to land in my brain.

What’s your routine for thinking of a cartoon idea, executing it, then getting it out into the world?

I try to have my idea before I go to bed and when I wake up, I turn on the coffee, procrastinate for a while, and then start drawing. I start my writing routine for the next cartoon while drawing that cartoon. I watch and read news all day. It’s hard for me to listen to the newsmakers without sarcastic responses going through my head. Sometimes I get an idea that way and other times it’s a very excruciating process. I also get ideas by screaming at the TV and talking to myself…like weird people do.

I can imagine for editorial cartoonists it’s difficult to separate life and work—do you try to put up boundaries from all the topics you post about?

I don’t know if you pull off a streak without work becoming your life. I’m single and live alone so work has kind of become my life since I was laid off from my last newspaper job in 2012, and I left Creators Syndicate to start my own self-syndicate. I knew to succeed and to make my cartoons as irreverent and strange as I was envisioning, I needed to focus. I cut out a lot of stuff I used to do like playing live music (I was in a band). I feel bad when people ask what the last book I read was because I haven’t read one since I started my syndicate. I haven’t even read the book Bob Woodward signed and sent to me (please don’t tell him). There’s not much separation for me between life and work. Ask my ex-girlfriend.

But, when I do get out and I’m having a beer or something and the person I’m talking to asks, “What do you do?”, I might just answer, “I do stuff for newspapers.” It can be difficult to explain what I do, and I don’t want to find out if they’re a Trumper or a goon who wants to talk about chemtrails. When I am out, I don’t want to talk about politics.

I’m going to keep the streak going but a lot depends on stuff like health or emergencies. Maybe a blizzard will hit, kill all my power to transmit the cartoon, and on my way to a McDonald’s for a McMuffin and free WiFi, I’m attacked and eaten by an urban wolf pack. We can’t predict the future. I don’t have a goal for the streak, and maybe one day I won’t think it’s important anymore, say, “I’m tired,” and sleep in. I think one day at a time is the best approach. The streak is just a bonus for me by trying to stay consistent.

Any stretches in the past five years that have been particularly difficult? Particularly rewarding?

There haven’t been any stretches that have been difficult thanks mostly to Donald Trump. One of the main topics at cartoonists conventions over the decades isn’t just the difficulty of finding your cartoon idea, but subjects on slow news days. I haven’t had a slow news day since 2015. If anything, I’ve had more trouble deciding on what outrageous topic to choose from several outrageous topics. You may still struggle with writing a good idea for it, but the subjects are there. There has not been one day since Donald Trump came down that stupid escalator to bark racist ideas to an audience he paid to be there that I haven’t had a cartoon subject. …

As for rewarding, awards are rewarding. So are reprints in major publications and getting thousands of shares, likes, and comments on social media. But the most rewarding are reader reactions to my work. I’m rewarded when a reader says my cartoon made him spit out his coffee. I’m sure I’m not the only cartoonist who has readers thanking them for helping them keep their sanity throughout all this over the past six years.

My cartoon on the passing of the “Notorious” RBG was rewarding, not because I think it’s my best cartoon, but because my readers took it and made it their cartoon. I was humbled by all the appreciation expressed to me by female readers. They wanted copies of the cartoon and the image on T-shirts, coffee mugs, and other assorted merchandise they could keep as souvenirs and mementos because they really loved Ruth Bader Ginsburg and her death was a personal loss to them. It was to me, too. I had similar reactions and praise for my Betty White cartoon, and I hate obituary cartoons. But my readers' reactions made me feel like I did good. 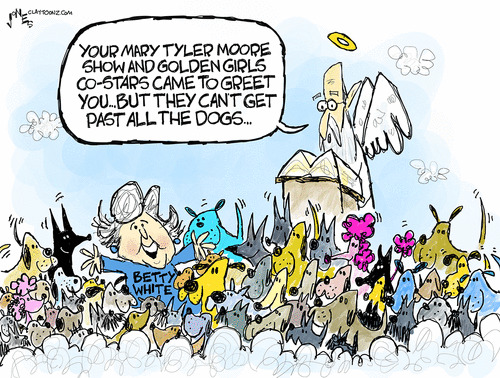 Anything else you want our readers to know about your work and/or this achievement?

I want to thank every reader, whether they love me or have cursed at me. Without them, I wouldn’t be able to do this and would have to get a real job where I’d have to talk to people. Ew.

But I love my readers, and I invite my critics. Other cartoonists have larger followings, but mine’s better. I literally get cards in my snail mail. My fans are amazing and most of them have heard me say to them, “you rock.”

The main thing I think I want my readers to know about this streak is that there is a streak, and not just with the cartoons but also the blog and videos. I even created a few animations during the pandemic. I guess I want readers to know I’m working hard at this. Only the most loyal at GoComics are aware there is a streak, but they probably don’t know it's five years. Oh my god! Five years? I need a nap.

You can keep up with Clay Jones's streak by following him on GoComics.