After a three-year hiatus, cartoonists finally gathered again for the annual Reuben Awards this past Friday, September 16.

The 76th Annual National Cartoonists Society (NCS) Reuben Awards took place in Kansas City (which is also home to the GoComics team, as part of Andrews McMeel Universal), two years after Kansas City's hosting commitment was canceled amid the Covid-19 pandemic. The last time the Reuben Awards happened in person was in 2019 in Huntington Beach, California. 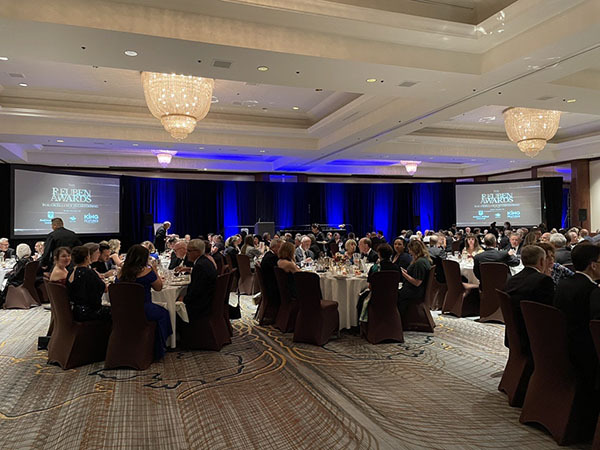 The NCS Reuben Awards recognizes the year's outstanding achievements in the cartooning profession. There are several award categories, the highest honor being Outstanding Cartoonist of the Year, which is chosen via an anonymous ballot of NCS members.

On Friday, dozens of cartoonists gathered at the Marriott in downtown Kansas City for the black-tie affair. After cocktails and dinner, NCS President Jason Chatfield (also the creator behind Ginger Meggs) kicked off the ceremony.

"The last few years have been difficult, but they've been extremely transformative for the National Cartoonists Society," Chatfield said. "We took what happened as an opportunity to grow and to transform and to evolve."

Chatfield then passed the mic to the awards' presenters. A number of GoComics creators were nominated for and won Reuben awards—here's a rundown.

Garry Trudeau (Doonesbury) took home the Gold T-Square, which is awarded to cartoonists for 50 years as a professional cartoonist. Jeannie Schulz, widow of Peanuts' creator Charles "Sparky" Schulz and President of the Board of Directors at the Charles M. Schulz Museum, was awarded the Silver T-Square, which is given to those who have demonstrated outstanding dedication or service to the National Cartoonists Society or the profession.

GoComics editorial cartoonist Ruben Bolling took home a Reuben in the Editorial Cartoon category for his weekly comic strip Tom the Dancing Bug. Bolling is no stranger to award recognition: In 2019 and 2021, he was a Finalist for the Pulitzer Prize in Editorial Cartooning and in 2017, his limited-run comic strip Donald and John won the NCS Online Comics: Short-Form award. Bolling is also the artist behind Super-Fun-Park Comix. Bolling wasn't present at the ceremony, so his editor Lisa Tarry accepted the award on his behalf.

Jonathan Lemon, creator of Rabbits Against Magic, and Scott Nickel, artist behind Eek! were both nominated in the Online Comics: Short-Form category. Nickel was also a nominee for the Greeting Card award. Hector Cantu (Baldo) and Mark Tatulli (Lio) were nominated for Reuben awards in the Newspaper Comic Strips category, and Tatulli was also nominated for 2021 Cartoonist of the Year.

Illustrator Edward Sorel took home the honor of the 2021 Cartoonist of the Year.

Congratulations to all of the winners and the nominees!